Castle Assault is a unique gaming experience combining the ferocious onslaught of Tower Defense games with the strategic elements of CCGs and progressive advancement of RPG’s. Castle Assault seeks to break the mold of traditional card games and organically extracts the most enjoyable parts of these different genres and distill them into a standalone concept. Castle Assault plays in about 30 mins, and is for 1 or 2 Players.

Each Player controls a Castle on either side of the Battlefield with 10 Health and a Hero outside of the Battlefield. Players play Units from their hand to the gameboard and these Units physically move toward the opposing Castle based on the Abilities of that Unit and your choices with the intent to bring your opponent from 10 to 0 Health. Should you destroy your opponents Castle or destroy their Hero you win!

Card combat is fast and furious; every time two opposing Units touch each other in the same column, they Engage in combat (which is often), and can happen either during the Move Units step or during the Open Phase by Charging or using an Ability described on your Units. Combat is resolved immediately with Unit cards exchanging their combat values at the same time (with no luck involved). Should either Unit have a higher attack number then the Armor + Health of the opposing Unit, that Unit is destroyed. Should a Unit smash the opposing Castle without a defending unit, that Unit attacks the opposing Castle directly lowering that Castles Health by the Unit’s attack value. 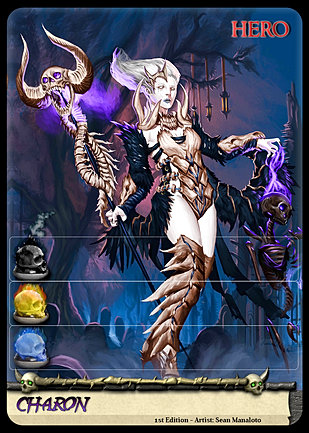 Your Hero grants some bonuses throughout the game and you can even join the Battlefield to turn the tide, however should your Hero be destroyed you immediately lose the game. As you progress through the 1-Player Campaign and complete feats or heroism you can level up and customize your Hero based on the way YOU play.

Every deck is also customizable meaning your Unit selection can be optimized before battle, but note this is not a ‘pay-to-play’ type game. You receive all the cards from all warbands including the 1-Player warband in the Core Edition (NO BOOSTERS). 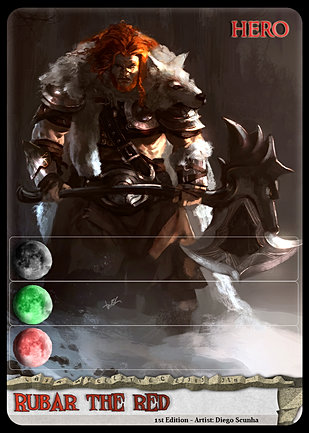 Most Units have Abilities to; keep them alive, move more quickly, laterally move, resurrect, summon allies, surprise, dissipate, and damage the opposing Castle from afar. You may feign attacks, play Commands to make your Heroes more powerful in a myriad of methods to tactically breakdown your opponent.

The 1-Player Campaign provides a “Right-Outta-the-Box Experience” with 9 Scenarios culminating in a final boss showdown. 1-Player mode operates by Monsters auto-populating in the opposing Castle with your victory condition changing every Scenario including outright smashing the opposing Castle, destroying a boss overlord, or surviving the onslaught. With 9 Scenarios per 6 warbands it creates 54 different challenges (9 campaigns x 6 warbands = 54 games).

In the most ancient elven tomes, lay fragments of origins of the world know then as Caleas’ri’eal.  Named after the great crystalline dragon god, whom before the dawn of time, descended, begot a brood and breathed life into the barren world seed before returning to it’s celestial kingdom.  This world, as the legends say, grew into a lush haven, rich with life and resources around the fallen kingdoms and castles of ages lost. It’s ancient forests bestowed protection and sustenance to the first of it’s people whom called themselves the Caleas’ri’ealven, and whom in turn dedicated themselves as it’s caretakers.  In this state of peace and prosperity, the forests grew, and as they did, so too did the Cales’ri’ealven dominion.  As their lands grew, minor conflicts broke out with a strong and brutish people they called Or’Cales, but so too did their knowledge and discoveries of their enchanted world.

Ages passed till, deep in the bowels of Mount Thaen’rix, the rumored dragon’s cave where Caleas’ri’eal was said to birth it’s brood was discovered.  However to their surprise, hidden inside and sealed and protected by magical wards, the tomb of an ancient king and his people were found, teeming with enchanted artifacts beyond imagine.  Called “Artifice”, these items imbued their wielders with knowledge and magical power of the gods themselves, and the more one acquired, the greater their gifts bestowed.

But with such awesome power, so too grew hubris. Whether spurned by madness or avarice for glory, the first emperor As’ri’eal acquired all known Artifice, declaring himself  “God-King”.  No longer content with dominion over the mortal plane, he set about using the mystic knowledge of the Artifice to summon forth the celestial kingdom of the divines so that he could take his seat on the throne of the gods.

Using their mystic power the god king enslaved the Or’cales and forced them to build an Artifigate, a magical beacon and portal into the realms beyond.

Many legends and lore conflict with events that transpired.  Some say it was punishment from the gods for the pride of As’ri’ael, others say his enemies descended upon him in a moment of distraction.  But what is known, is that a comet hailing from the heavens descended and collided with the Artifigate, crashing the crystalline castle of the celestial kingdom into the highest spire of Mount Thaen’rix.  The assault of the castle scattering the Artifice and the Artifigate all across the realm.

Ages passed, and the world descended into chaos.  The presence of the dark castle and the shattered Artifigate warps the world in strange magics creating all manner of monsters and men.  Banding together in the Castles and keeps of a forgotten age, these last free peoples forge themselves into Factions, united in purpose as a bulwark against the darkness.

Just as the last glimmer of hope seemed extinguished from the world, the scattered Artifice reappeared in the ravaged lands of Caleas’ri’eal.  Discovered by the boldest of their kind, the Artifice bestowed their power upon these chosen “Heroes” and in so doing, the strength to fight back the tides of war.  Freeing and banding their people from the brink of destruction with their new found power these “Heroes” forged a new kingdom, but one of borne of blood.  As the new Artifice arms race once again ignited the already ravaged world into one of all out war, it became clear to all what needed to be done: Capture all Artifice and Assault the Black Castle, taking the throne as “God-King”…

Legends say that upon discovery however, the rouge prince found it guarded by an ancient and dark goddess. True to his name, he charmed the goddess by stealing her heart and taking the key for his own. Discovering his betrayal, she cursed him to walk the world a monster, living on the blood of those hearts he tried so desperately to save.

You are not playing a deck.  Its Living a Culture.

In the ancient darkness of the cataclysm there existed hushed

whispers of terrors that stalked the night, feasting on the

life-essence of travelers and adventurers. These “Vampyr” were

feared throughout as demons of lust whom masqueraded

amongst the living and wrought only death.

As the first kingdoms and races arose from the dust, these

horrors were brought down equally upon all.  Many fell to the

terrors and monsters that stalked the darkness and only the

bravest or the truly desperate would seek the means of power

to defend against the looming specter of death.

What stirred such sweeping fear is the Vampyr’s doom.  This doom was laid upon many and after the Vampyr consumed their prey, they would empower the shell of the former being to walk the earth to execute the Vampyr’s bidding.  These terrors are the “Sanguine”… and none have not fallen under their control.

One of the youngest races, The Gilded Knights remain one

Assault realm.  From what record is left, Eal’ven lore speaks of

the first appearance of men on shores of Den’driot (Remorse

the endless thunderstorms and rain hurdling and smashing

against Mount Thaen’rix after the cataclysmic destruction of the

keeps and castles scattered on the rugged plains of the shore

from a forgotten era. These first men and women were looked

upon as savages and easily devoured by the countless monsters

that roamed the destroyed land, and each night’s darkness only

bringing new terrors upon this people.

But humanity was brave.

One man refused to accept the plight of his people. Each day as if possessed, he looked out to a sizable fallen outpost who’s spires reached out from a jutting piece of rock between two major outpours of Mount Thaen’rix.  Held within the center of these fast flowing waters this keep held hope of an area that once secured could serve as a bulwark against constant attack.  Despite all warnings he ventured out, against the incessant howls of monsters, treacherous currents, and complete lack of supplies he made the impossible journey to this outpost and claimed it for his own.  And when all hope for his return was lost, he appeared: wielding a golden shield that shone brighter then the sun. A glimmer of hope, a light and beacon in the darkness.

Dubbed “The Rock of the Lake”, this first king of men led humanity into a golden age of survival. They built their first kingdom on the outpost, with it’s fast watery currents offering natural protection from the fears of the night.  The order of the Gilded Knights was established and within this community created and honed the best and bravest of what humanity had to offer, and what had begun as skills for survival had

developed and evolved into a conquering way of life.

Resources were discovered on The Rock, however not of

the life sustaining variety, and as this culture grew so did

their demand of edible items.  The Gilded Knights had

fostered adventuring to become what they were, but now

adventuring became much more… it became a way of life.

strongest cohort would venture the waters, and time after

time return with the wealth of the valley.

But then… he did not return…

Time passed, and the kingdom perceived new assaults, of both the Unnamed Undead Vigil and other races vying for power left humanity on the brink, and the Gilded Knights decimated. With the King dead by an unknown hand, he was succeeded by his only son, Derr’ac, whom was widely regarded as a champion of the people by making great sacrifices for the kingdom’s defense.  As next in line for the crown he refused the throne only to become the great adventuring conqueror as his father had done.  Taking up command of the Gilded Knights and vowing to reclaim a foothold on the valley for humanity Derr’ac has succeeded — and continues in many a long fight.

With the Gilded Knights on the move and often absent

securing sustenance and life, the defense of the outpost

has fallen to the highly capable women who have taken

up arms to defend themselves, routinely trumping the men

in the field of battle.  While previously filling roles as scouts,

advisers, and mages, the reformations of Prince Derr’ac

have not only embraced women into the order of Guilded

Knights, but to they have become the bulk of humanity’s

fighting force. In this rise of the Lake-lander’s hour, it is

undoubted they are the strongest glimmer of hope.

The Golden Shield against the darkness..