New Starfinder and D&D Campaigns Begin on 1/5 at The Wandering Dragon!

Participation in these event requires the purchase of the Starfinder Core Rulebook or D&D: Player’s Handbook from the Wandering Dragon. If you have already purchased your book elsewhere please email us at Info@WanderingDragon.com to inquire about availability. 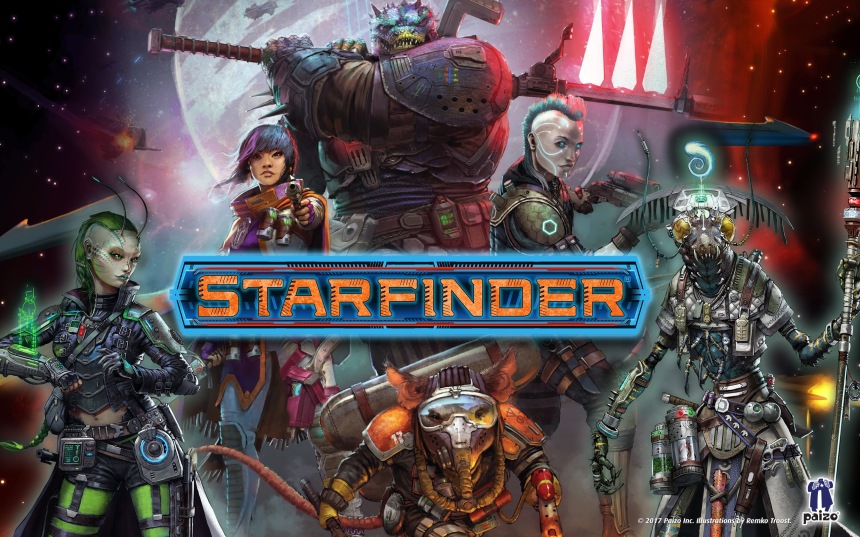 In the Dead Suns Adventure Path, the players take on the roles of members of the Starfinder Society, a loose association of scholars and adventurers who travel the galaxy uncovering the secrets of the past. When a fragment of an ancient alien superweapon surfaces in the depths of hyperspace, its discovery sets off a race to find the extraterrestrial doomsday device. Hopping from planet to planet in both the civilized Pact Worlds and beyond, the heroes must contend with both the undead Corpse Fleet and the nihilistic Cult of the Devourer, each of which seeks to acquire the alien artifact for its own purposes. Can the heroes find and destroy the superweapon before their enemies seize control of it, or will the Pact Worlds’ sun go dark and cold, a harbinger of dead suns across the galaxy?

Set thousands of years in Pathfinder’s future, Starfinder is a science fantasy roleplaying game designed to bring you a whole new universe of science fantasy adventures. Play alien races both new and familiar as you explore the mysteries of a weird galaxy. Will you be an android assassin fulfilling corporate contracts, or a plucky ratfolk mechanic? A spellhacking lashunta technomancer, or a rakish human pilot? Uncountable worlds are waiting for you and your intrepid crew!
The world of Starfinder puts you and your friends in the role of a rag tag starship crew exploring the mysteries of a weird, science-fantasy universe.

This bi-weekly campaign is for players of all experience levels and participation in this event requires the purchase of the D&D 5E: Players Handbook from the Wandering Dragon. If you have already purchased your book elsewhere please email us at Info@WanderingDragon.com to inquire about availability.

Dare to descend into the Underdark in this adventure for the world’s greatest roleplaying game!

The Underdark is a subterranean wonderland, a vast and twisted labyrinth where fear reigns. It is the home of horrific monsters that have never seen the light of day. It is here that the dark elf Gromph Baenre, Archmage of Menzoberranzan, casts a foul spell meant to ignite a magical energy that suffuses the Underdark and tears open portals to the demonic Abyss. What steps through surprises even him, and from that moment on, the insanity that pervades the Underdark escalates and threatens to shake the Forgotten Realms to its foundations. Stop the madness before it consumes you!

Participation in this event requires the purchase of the D&D 5E: Players Handbook from the Wandering Dragon. If you have already purchased your book elsewhere please email us at Info@WanderingDragon.com to inquire about availability.

Under raging storm clouds, the vampire Count Strahd von Zarovich stands silhouetted against the ancient walls of Castle Ravenloft. Rumbling thunder pounds the castle spires. The wind’s howling increases as he turns his gaze down toward the village of Barovia. A lightning flash rips through the darkness, but Strahd is gone. Only the howling of the wind fills the midnight air. The master of Castle Ravenloft is having guests for dinner—and you are invited.

This adventure is for 1st level characters. It is encouraged for players to bring their own and to use mainly just the Players Handbook and the Curse of Strahd book to create their characters. All characters will be subject to the DM’s approval.