Wow! The Fallen Frenzy continues! 20+ players came out last night for the game that has taken The Dragon by storm!

So many players have “Fallen” in love with this great new game that we are doing it all over again, on Valentines Day! Grab your Sweetie, come out to The Dragon and get ready to fight to the death…all in the name of love…of the game. wink emoticon

If you already have Fallen, bring your copy and challenge another Adventurer…or Dungeon Lord, to a game. If you haven’t played this awesome new game yet…what the heck is wrong with you? Get in here and check out Fallen!

Watchtower Games has come out of the gates swinging with their smash hit debut Card & Dice Game, Fallen! Fallen is coming to The Wandering Dragon bringing with it rave reviews and an 8.76 Rating on BoardGameGeek!

Fallen is a two player card and dice game that takes dungeon exploration to a whole new level. One player chooses a Hero to delve deep into the dungeon seeking the ultimate evil that waits down below. A second player plays the role of the Dungeon Lord, throwing traps and ferocious monsters in the Heros path.

Set in a fantasy/dungeon setting, Fallen utilizes a unique Story Card system which generates a variety of adventures and challenges for the players. Players can choose to be either a Hero, fighting for the Light…or a Dungeon Lord, calling forth the Dark. In their adventures, the players take up Power cards to cast spells and make daring moves to win the challenges. After three of the Story Cards have been played through, the adventure comes to a dramatic final battle to decide the winner of the game!

Fallen takes place inside a randomly generated dungeon made up of Story Cards. Each Story card is a new scenario that the Hero must overcome to complete their quest. Within each Story card are ten different challenges that branch into different paths the Hero can take.

The Story cards bring the dungeon to life. Leaping over chasms, solving ancient puzzles, and fighting terrifying creatures are just a few of the challenges that await the players.

Play as the Hero battling through the dungeon in your quest to slay the dark power far below. Adventure as the Pit Fighter using strength and brutal tactics, the Sorceress calling upon illusions and destructive magic, or the Thief focusing on stealth and trickery.

With three different Hero characters to choose from, each with 9 unique skills, 10 specialized power cards, and custom starting equipment, there are plenty of ways to explore the dungeons of Fallen.

Characters include the Pit Fighter who uses strength and brutal tactics, the Sorceress who calls upon illusions and destructive magic, and the Thief who focuses on stealth and trickery.

Each character comes with 9 unique skills that allow you to build your character your way. Do you want your fighter to have monstrous strength or do you give him a tactical edge to the fights? Does your sorceress call forth devastating spells of power, or is she a swordmage capable of fighting toe-to-toe with sword and spell? 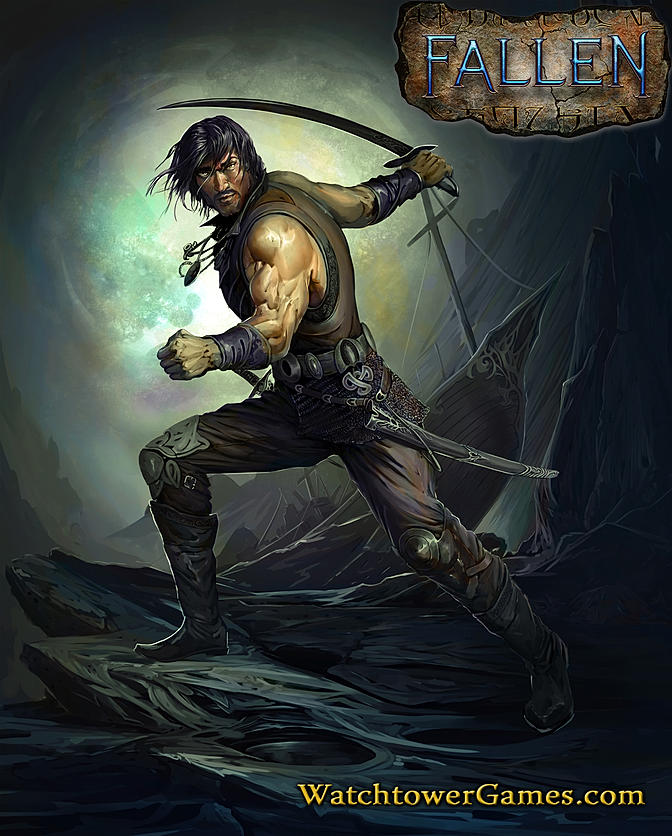 Deep at the bottom of the labyrinth lies the Dungeon Lord, an evil power bent on the destruction of the Hero. One of three different Dungeon Lords can be played including the Archivist of Souls, the Forge Master, and Krogarn the Ogre King. Each Dungeon Lord has 10 unique power cards that range from necromantic spells to devious traps.

As the Hero explores each room, the Dungeon Lord throws chaotic magic and violent creatures in their way. A challenge for the Hero to decipher ancient runes on a sarcophagus becomes a nightmare when the Dungeon Lord sends a Shadow Fiend screaming into the room.

Each time the Hero is defeated, the Dungeon Lord grows in power. Summoned creatures can be leveled up giving them greater strength and new abilities.

If the Dungeon Lord is able deal a crippling blow to the Hero, then a powerful Omen card can be acquired. With one of these cards in hand, the Dungeon Lord has a deadly trick ready to spring whenever the Hero is at their weakest. 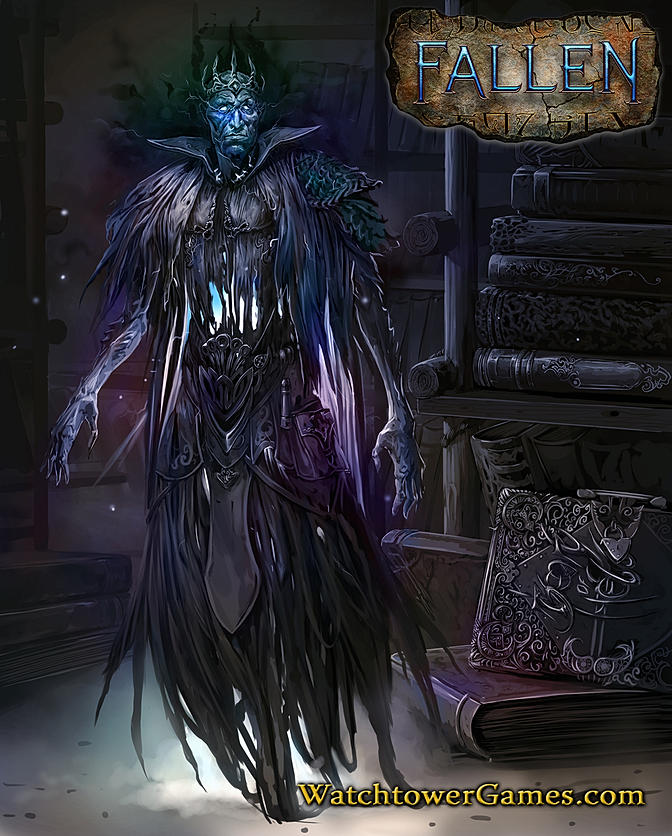 Four different challenges must be faced during each Story card. A challenge moves the Hero deeper into the dungeon and sets the stakes and type of dice to be rolled.In this example, the Hero’s path through the story has led him to “Bloody Melee”, a fight with thieves in an old hall.

With his back against the wall, the Hero is pressed hard by the thieves immediately taking a point of damage. The treasure symbol shows that a valuable treasure card is at stake if the Hero wins, and the red symbol of an arm tells the players that this is a strength challenge. 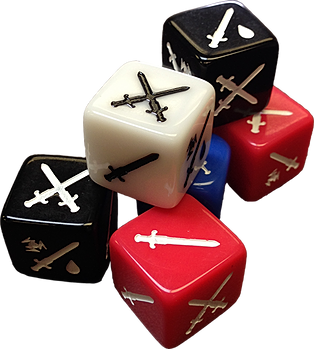 The Dungeon Lord rolls the dice, plays any special abilities from Power cards, and counts the total number of swords rolled on the dice.

The Hero then rolls the type of dice based on their strength, agility, or intelligence. Equipment such as the Iron Sword, Storm Flail, or Mana Ring can be used to help win the challenge. The Hero rolls the dice, plays Power cards, and counts the total number of swords rolled.

The focus on the game is playing card combinations, spending Fortune and Charges wisely, anticipating what your opponent will do, and choosing the right rewards to help you further in the dungeon.

If the Hero rolls the most swords, then he is victorious gaining treasures, experience, and new abilities. However, if the Dungeon Lord wins the challenge, then the summoned monsters grow stronger and the dungeon becomes even more perilous.

The adventure culminates in an epic battle between the Hero and Dungeon Lord with only one player left standing.

Here, at the bottom of the dungeon, surrounded by minions and dark spells, the evil Dungeon Lord faces off against the Hero. With the skills and magical artifacts recovered from the dungeon, the Hero must rise to the challenge to finally bring an end to the Dungeon Lord.

One final battle to return the world to the light or plunge it back into darkness.

This is the game of Fallen.