Queen Himiko has tasked every builder in the kingdom with a prestigious mission: build the capital of Yamataï and make it the jewel of the archipelago. Your task: surpass your competitors and build the most prestigious city of them all, using resources from the fleets that travel through the kingdom. Prepare your strategy, recruit specialists, and do whatever is necessary to become the best builder and be rewarded by Queen Himiko for your work. In the end, only one name will be remembered as the greatest builder of Yamataï! 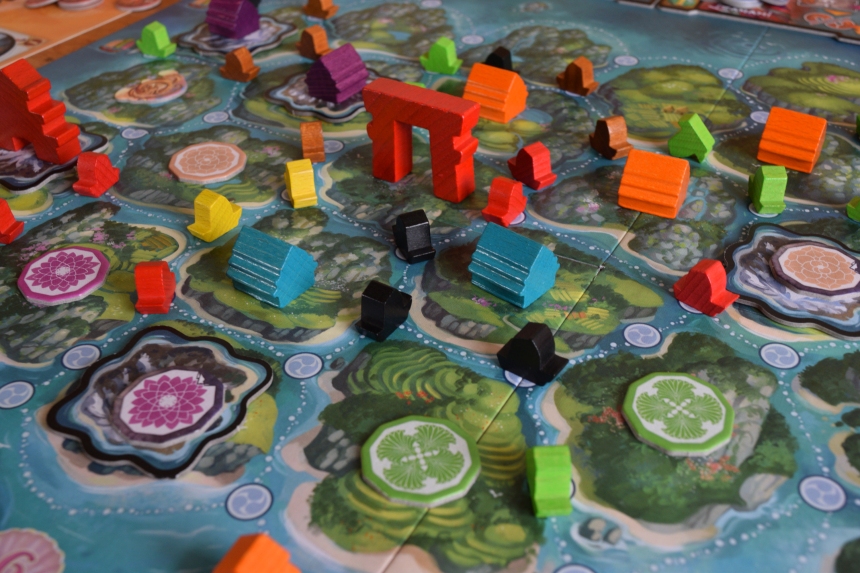 In Yamatai, 2-4 players compete to build palaces, torii, and their own buildings in the land of Yamatai. The game includes ten numbered action tiles, each showing one or more colored ships and with most showing a special action. You shuffle these tiles, place them in a row, then reveal one more than the number of players.

On a turn, each player chooses a tile, collects the depicted ships from the reserve, optionally buys or sells one ship, then places the ships on the board. The land has five entryways, and you must start from these points or place adjacent to ships already on the board. You can’t branch the ships being placed, and if you place your first ship adjacent to another, then that first ship must be the same color as the adjacent one; otherwise you can place ships without regard to color.

After placing ships, you can either claim colored resources from land that you’ve touched with new ships this turn or build on one vacant space. To build, the space must have colored ships around it that match the ships depicted on one of the available building tiles. If you build a personal building that’s connected to others you own, you receive money equal to the number of buildings.

You can bank one ship before the end of your turn, then you can use any three resources or a pair of matching resources to purchase a specialist, each of whom has a unique power.

After all players go, you shuffle the action tiles, place them face down in the row, then reveal enough tiles at the front of the line to set up for the next turn, with the turn order being determined by the numbers on the tiles that players chose the previous turn. Once you trigger one of the game-ending conditions — e.g., no ships of one color or no more specialists — you finish the round, then count points for buildings built, specialists hired, and money on hand. 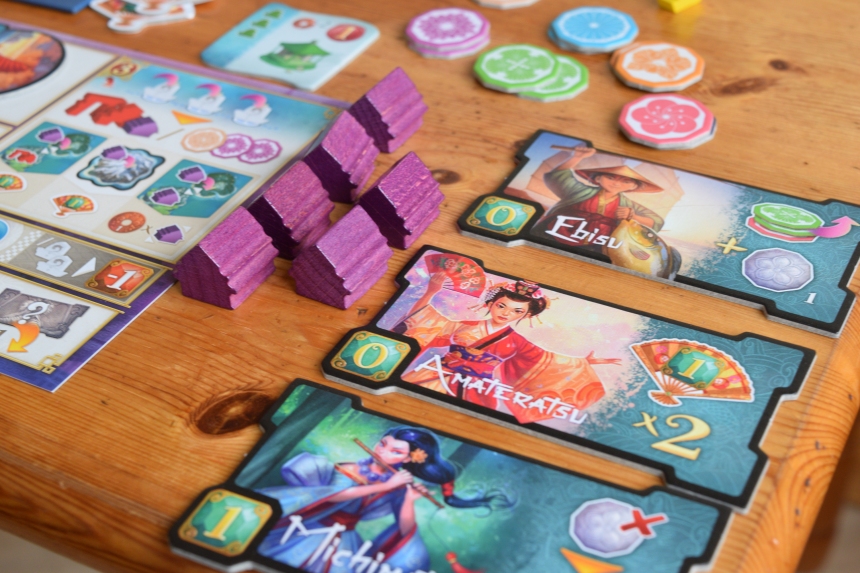 However, you are not alone in competing for Queen Himiko’s favor… will you manage to surpass your opponents?